Halfway to the weekend!

Well, it's Wednesday so only a couple of days until the weekend. I had a fab day scrapping with Bex on Bank Holiday Monday. I managed to get another LO done and also a CJ that I needed to get posted this week. 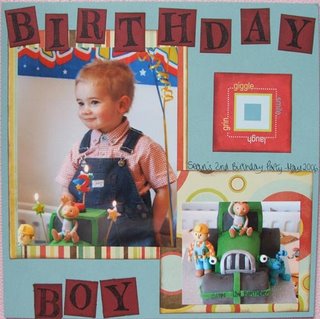 Here is the LO I finished over the weekend, it was started at Bonanza in the cropping room...and has sat unfinished since.
The picture is of my nephew Sean and was taken this month at his 2nd Birthday. He really is a cute little boy, with such personality. He kept making us sing "Happy Birthday" to him...I think we sang it at least three times.
Georgia has insisted that we watch Wallace & Gromit "Curse of the WereRabbit"...AGAIN. While we were in the kitchen, I spotted her dancing to the scene were Gromit is pulling the strings of the "lady" rabbit to the tune of the striptease...It was so cute hand behind head, other hand on hip and full bottom wiggling going on.......she suddenly caught us watching and became very shy....will have to try for pics another time.

Managed to get a cute picture of one of our kitten called Sweep, she is such a gorgeous little minx...and it seems she like Scrapping!!!! Check it out for yourself... 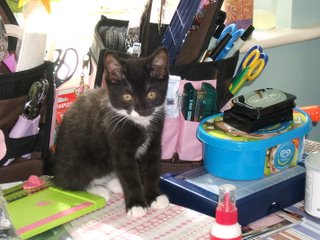 She has the sweetest personality. Her Brother Sooty is not anywhere near as brave as she is, but he purrs like a tractor as soon as I start to stroke him. They follow me around...they are really Mummy's Kittens....but don't tell Georgia.
Posted by Unknown at 11:39 pm No comments:

I seem to have acquired Bex's Creativity

OK, so Bex has lost her creativity....and I think I may have stolen it.....mwhahahaha

Can't believe I have done 2 new LO's and finished off two that had been sitting around for the last couple of weeks. 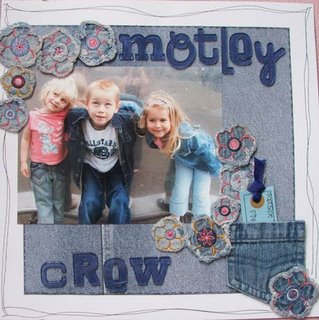 So here it is, a picture taken at Xscape Milton Keynes on Saturday 20th May of my daughter Georgia and my neice and nephew, Hannah & James. The girls both had birthdays during the week, and wanted us all to go bowling together, so they made the trip up from Weybridge for the day. The picture was taken with them standing on a bench that is outside, it is metal and wavy and has a metal wavy background. I love the way you can see their feet in the reflection, and if you look closely there is my reflection taking the picture too. I even used an old denim skirt that had belonged to both girls that they had both grown out of...a new form of recycling. Now I seriously doubt anything more will be done this evening, although Bex is supposed to be coming over to scrap tomorrow.
Posted by Unknown at 8:37 pm 1 comment:

Well there was I promising myself that this would be a waste if time as I have never in my life kept a diary, online or otherwise. And low and behold I am here boring you all again. I have found some time to scrap this weekend and have finished another couple of LO's. One was started over a week ago, but those chipboard alpha's take time to decorate.....especially with paint and glitter.....I am still twinkling from the glitter episode. 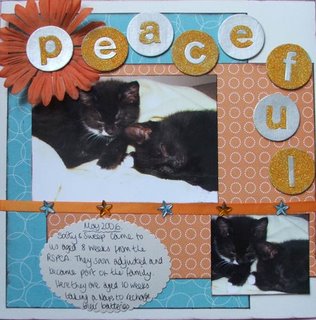 Here is the one that I only had to finish off. A picture taken of our new kittens, Sooty & Sweep. The were snuggled down and I could not resist the photo opportunity... they had better get used to having their pictures taken, as I am hardly likely to stop with such cute subject matter... 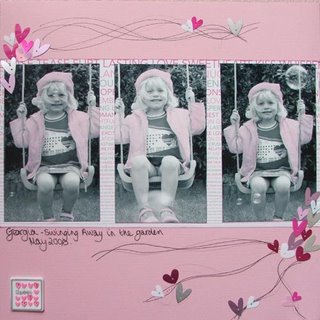 These pictures were taken last Saturday while we were waiting for my family to arrive for Georgia & Hannah's Birthday BBQ and Bowling Party. I tried to use Photoshop Elements 4.0 to turn the picture B&W and then make the pink jacket and hat show through.....but I could not get it to look right. Instead I used a technique I learnt at Bonanza from Michelle Charles....I used ink to colour tint the photos. I am quite pleased with the effect, and it was a lot less stressful than Photoshop...LOL. I am still not sure about doodling directly onto LO's, but it is too late now...so I am going to have to live with it. That's all for now folks!
Posted by Unknown at 12:56 pm 1 comment:

Well, I have decide to join the masses and have a Blog. You will probably all be very bored reading about my mundane life.....but tough. 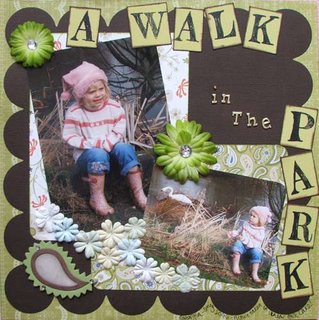 So it is the Bank Holiday Weekend and surprise surprise it is raining. Not that I mind as I am beavering away in my Craft Room. I have finished the title on a LO I started at the MK Crop earlier this month, and also done a LO with a picture my Sister had taken at Venture earlier this year. Ok, here they are....wasn't as hard to upload them as I thought......yay for me. Ok, this is the one that I finished the title on. This was a FAB kit put together by Lynsey & Rachael at the Milton Keynes Scrapaholics Club earlier this month. All except the L'il Davis Blossom and the Alpha Bradletz were included in the kit. I wasn't sure that Georgias' pink clothing went with the papers, but the background of the picture seems to make them work. 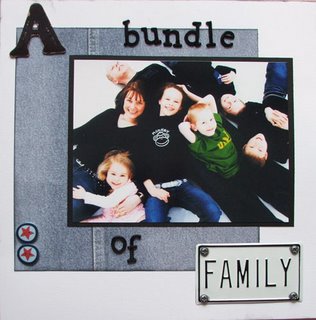 Ok, this is the one with a picture taken of my Sister Tracey and her Hubby Frazer with their Kids.....Alex 14, Michael 12, Jody 11, James 7 and Hannah 5. I love the relaxed way they are all in a heap.

Ok, back to the scrapping...more LO's to create.

If you have any questions, please email me
Thanks
Caz
x

The time in my part of the world!

My lovely happy followers.....Thank You!